AFC have decided to revamp the confederation's national team competitions as they announced they are expanding the Asian Cup Finals.

Under the new format, Asia’s showpiece event – Asian Cup – will have 24 teams in the tournament proper instead of 16. The 2014 AFC Challenge Cup, to be held in Maldives in May this year, will be the last edition of this competition.

The preliminary round will likely see the numbers of teams reduce from 46 to 32 first as the teams will be divided up into eight groups after that for AFC always put 4 teams in a group.

It may then spell bad news for Singapore as it may mean we may only play 2 official games in 4 years.

From the preliminary round, the eight group winners and four second best teams will qualify for the FIFA World Cup final round of qualifiers and also the AFC Asian Cup finals.

It is unlikely Singapore will do that well to get a spot in the first stage but that is where the good news is for we only need to finish third in any group to get into Asian Cup Finals with it expanded to 24 teams.

Of course my hope to avoid a disaster is that AFC will ensure the number of teams in each group for the preliminary round is 5 teams like CAF whom they have copied the idea to merge the FIFA World Cup and regional qualifiers.

It will mean 40 teams and a minimum 8 games for most teams with only 6 teams losing out.
Posted by happy at 8:36 PM No comments:

Both Home United and Tanjong Pagar United have confirmed their respective star signings Lee Kwan Woo and Monsef Zerka have renewed their contracts for the upcoming season.

Both came with big reputation and they delivered in the 2013 season as each notched 12 goals in the S-league and Lee led Home to second as well as winning the RHB Singapore Cup while Zerka saw his club reach the Final.

For his effort, South Korean Lee was named as Player of the Year and he told SPH Straits Times: "I have really enjoyed myself in the S-league and I like the lifestyle in Singapore.

"I have stayed because I want to pursue more glory with the club.

"We are in the AFC Cup this year and I hope the team can go far in the tournament."

Similarity, Tanjong Pagar are delighted to see Monsef Zerka, a former Moroccan international, back with them.

Jaguars coach Patrick Vallee said: "I am very happy to have Monsef back. He did what was expected of him last season and he helped the team win many matches. He is a player who adds a lot of value to the team."

According to Greek sources, Tampines Rovers marquee target Miljan Mrdaković may well be set to come to Singapore as he has negotiate a release from his Greek club Verina.

Earlier, TODAY claimed Tampines was willing to sign the former Serbian youth international if he could seek an exit from his Greek club and now that is the case, the striker may well be heading to the S-league.

In 2008, he was selected as one of the overage players for the 2008 Summer Olympics, which the national side exited in the group stages.
Posted by happy at 9:35 PM No comments:

Win is a must now (edited to add more info)

If South China was not fighting for Hong Kong football just a mere two weeks earlier, it must now for Hong Kong Independent Commission Against Corruption (ICAC) have announced they have arrested 6 players, 1 club officer or staff, 1 sponsor representative and a former player; a total of 9 persons.

This have lead to Hong Kong Football Association (HKFA) considering if they need to suspended both Happy Valley and Tuen Muen games until investigation is over.

And the management of Happy Valley is a mess as their chairman Pui Kwan-kay admitted he is highly concerned about the case yet was more concerned to push blames adding he is not responsible for managing the team or sponsorship of the club.

After being hit for that comments, Mr Pui, during an RTHK radio programme, admitted that the club is quite chaotic internally, and that its future is not optimistic.

He said Happy Valley has been hit recently by several negative reports involving management disagreements, and players have been questioned during matches for not trying their best.

HKFA is also not helping as they have yet to set up the task force to look into the matter even after 2 weeks as chairman Brian Leung Hung- tak and chief executive Mark Sutcliffe were still on vacation at this crucial period and only returned yesterday after the situation exploded and threaten all of Hong Kong football.

Hong Kong Secretary for Home Affairs Tsang Tak-sing has expressed his outrage and told both the HKFA and the clubs it is unacceptable.

Talks is now the Phoenix Project, which also include the revamped Hong Kong league next year, will be hit.

It looked like a win from South China in the AFC Champions League, to reach at least the final round, is a must to improve the situation.
Posted by happy at 9:01 PM No comments:

South China have announced their signings as they prepare for the AFC Champions League clash with Tampines Rovers.

The Hong Kong club have make 4 signings and one of them should be familiar to Tampines - Andrew Barisic (Australia-Croatian) - as the 27-year-old scored a brace against the S-league champions in last year AFC Cup for East Bengal which saw the Indian club walked away from Jalan Besar with all 3 points. 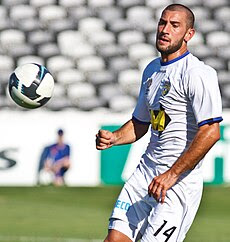 It looked like the tormenter is back to hunt again and this time Tampines will have to watch him closely.